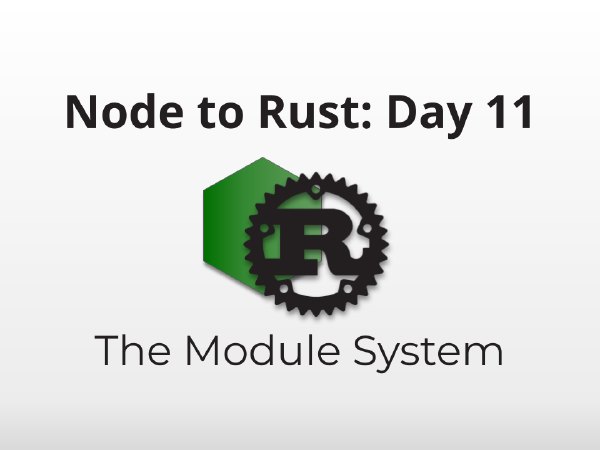 When released, one of node.js’s outstanding features was how simple it was to use. Want to run a JavaScript file? Just use node file.js. Want to include a local module? Then require("./module.js"). If your require() wasn’t a relative or absolute path, then node looked in the node_modules folder. It was a beautiful time. If you’ve gotten into node.js within the last few years, you probably have a different view of how simple it is or isn’t. It was simple, once upon a time. I swear.

Rust’s module system is a bit more nuanced. Once you “get it,” it won’t stand in your way. Until then you might be left wondering “WTF” more than once.

The quick answer is, you don’t. You don’t import files in Rust. You declare modules. If you declare a module with an empty body, then Rust will look for it on the file system according to its resolution algorithm. That resolution algorithm is highly dependent on the project’s module structure.

There isn’t a relative file path relationship like you’d have in node.

“How do I import functions from other modules?”

The use statement brings items from a module into scope of the current module so you can use them without qualifying them. This works with both external dependencies and local modules.

These two are largely the same:

Use {} to import multiple items, e.g.

Use super to import items from a parent module, e.g.

Use crate to import items starting from the crate root, e.g.

The pieces of the Rust Module System

Crates and the crate root

A Rust project is called a crate. The crate root is the source file that the Rust compiler starts with. In node that’s commonly called index.js and you would define it by setting the "main" field in your package.json. In Rust the root is typically main.rs for standalone executables and lib.rs for libraries. It’s configurable in your Cargo.toml.

The crate root dictates the root path where Rust will start its search for imported modules.

What is a module?

It’s easiest if you start with the understanding that Rust modules have nothing to do with file names or paths. You’ll see documentation that says otherwise and projects that make this appear to be the case, but it’s a lie. Modules are purely a concept within Rust’s brain.

A module is like a namespace where you bucket similar things. Modules are barriers for visibility, i.e. public, private, etc. You can have many modules in one file. Even nesting them in a single file is allowed.

Separating logic into different files is important for humans. Not Rust. Luckily Rust has support for automatically looking up modules on the local filesystem.

Let’s say we want to extract my_module into another file. We cut and paste its code into a file called my_module.rs and keep an empty mod my_module; in our main.js. The result looks like this:

The resolution algorithm in a nutshell is:

Note: The mod.rs part is technical baggage. It used to be the only way. It’s not recommended anymore but you’ll still see it on some projects so it’s worth knowing about.

What this means is that well-organized projects seem like their modules mirror a file system with relative imports. This can bite you if you assume that’s always true. The appearance is due to a project being well-organized. It’s not a structure Rust imposes.

Take a lone main.rs with the code below for example

Both mod module_a and mod module_b statements are in the same file. Where does Rust look for the modules on disk?

By default everything you define is private. BUT — and this is a big BUT — visibility is at the module barrier, not an item’s definition. That means everything in a module can access everything else in the same module. If you take the pubs off of everything in our traffic light example, it will still work. Sorry to trick you.

Visibility also only works up and out. Modules defined closer to the root can’t see anything defined deeper unless you change its visibility. You change visibility with the pub keyword.

pub makes something completely public, but only if it’s reachable via the visibility chain. That is, everything leading up to the pub item must also be pub.

You can tailor the visibility with modifiers on pub, e.g.

There are other modifiers, but they’re less common. You can learn about them in the [Additional reading section][].

The traffic light example from the past few days has grown pretty large. It’s due for some refactoring. Try to do it yourself. See what hurdles you run into before referring to the code repository to see how I’ve done it.

Repeat after me: mod is not import. Again, for those in the back: mod is not import. Once you get passed that misconception (and the mod.rs wonkiness), the module system is easy to manage. We’ve finally gone through enough to circle back around to the second part of our Strings guide. We’ll get to that tomorrow.