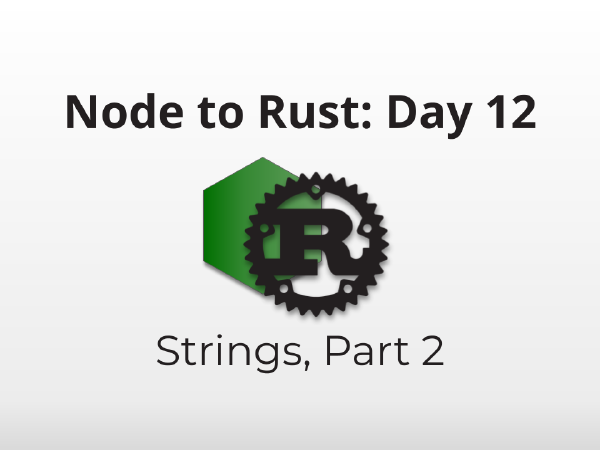 Now that you’re getting confident, you are probably itching to start your own projects. You know how to write some basic Rust. You know how to structure code. You’re done with contrived examples with traffic lights. As you play around and start writing your API, you’ll inevitably write some function that needs an owned String. That’s easy. We’ve done that before. Then it hits you…

It’s so ugly. I just couldn’t believe it at first. All I wanted was to create a satisfying API that could take a String as well as string literals. I didn’t want to make my users do things like add .to_owned() all over the place. It’s madness. It’s hideous.

I spent a long time tracking down what to do. This is my story.

Should I use &str or String for my function arguments?

The first question you need to ask is: “Do I need to own or borrow the passed value?”

For those of you still wrapping your head around owning and borrowing, think of this question as: “Do I need my own version of this value or do I just need to look at its data and move on?”

When you’re borrowing the value

If you don’t need your own version, then accept a reference. The main question then becomes “Should I use &str or &String” and the answer is almost always &str. Why? Well look at the function below.

You can pass a string literal directly, a &str assigned to a variable, and you can pass a reference to a &String which works automagically.

Why? Because the trait Borrow<str> is implemented for String. Anywhere you need a borrowed str, you can use a borrowed String without any hassle. The reverse is not true. If you change the function signature to accept a &String and try to pass a &str, you’ll get a compile error.

When you need an owned value

If you need an owned value then you need a String but there are a couple things to consider.

Here’s where you want to think about your API. Are you looking to own a string that comes from wherever? Or do you expect your functions to be called with a mix of string literals and/or Strings?

If it’s the latter, then you’re looking for the common ground between a String and &str, which we found clues to in the section above.

For a function that accepts arbitrary strings from anywhere — generated or non — you can accept arguments that implement ToString.

We talked about impl [trait] vs dyn [trait] yesterday but now I through in new syntax above. This is Rust’s generic syntax. The function needs_string above could have been written like this:

Nothing would need to change in the code. What’s the difference? Very little. impl [trait] in argument position is less powerful than generic syntax. Rust also has a where keyword which you can use to make the same thing yet another way:

There’s zero difference between the where syntax and the <T: ToString> syntax. Adding the separate where clause is for readability.

For functions that expect a mix of string literals and Strings

If you didn’t read this section, you wouldn’t lose much. Using the ToString method covers a lot of cases. You do however open your users up to the same concerns we described with using .to_string() to convert &str to String in Day 6: Strings, Part 1. Many structs implement Display. A user could pass a lot of objects to the function above without the compiler complaining. Additionally, implementations of .to_string() may not always be cheap. Your users don’t necessarily know the internals of your code. You might be doing a lot of extra work for no good reason.

Since we already learned that a &String can take the place of a &str, we can generalize our inputs to anything that can be borrowed like a str.

The below is extremely similar to the above but notice that our ip_address is no longer a valid argument. Just because it has a printable string form doesn’t mean it can be trivially taken as a str reference.

Strings used to seem so simple. We were so naive. I bet every time you dive back into node.js your eyes are going to tear up with joy. Eventually you’ll have the same feeling with Rust. You’ll appreciate how protective Rust is and how fast everything runs. Rust and JavaScript truly are a beautiful pair.

Next up we’ll dive into error handling, the Option enum, and the Result enum. As always, you can reach me personally on twitter at @jsoverson, the Candle team at @candle_corp, and our Discord channel.