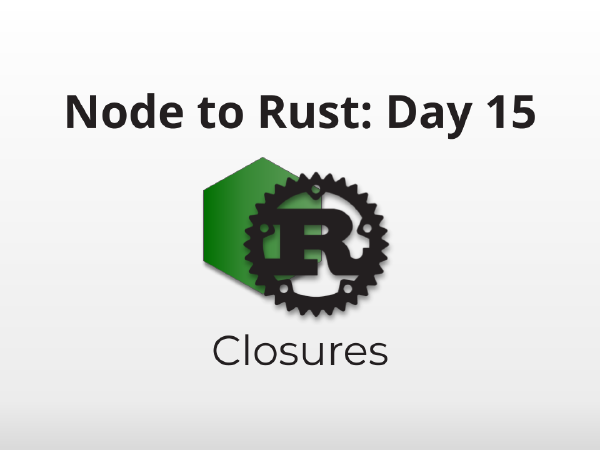 Closures are a natural part of JavaScript. It’s hard to imagine what programming is like without them. Luckily, you don’t have to. The behavior of Rust’s closures is similar enough to JavaScript’s that you will be able to retain most of what you’re comfortable with.

Closures are defined as functions that retain references to (enclose) its surrounding state. I use the term “closure” here as a general term to mean an anonymous function, regardless of whether or not it references external variables.

If you haven’t been following along with the code repository, now is a good time to start. This day’s code is available in Day 15 of the project on github.

This section maps JavaScript/TypeScript closures to the equivalent Rust syntax without much explanation. If you get lost, please reach out. Your perspective on what is confusing will help make this guide better. Don’t hestitate to message me on twitter at @jsoverson or in our Discord channel.

This closure prints Hi! I'm in a closure.

Closures with a single expression body

These closures show how you can omit the curly braces {} for closures that consist of a single expression.

Both JavaScript and Rust can omit the curly braces if the body consists of a single expression.

A proper closure references variables from its parent’s scope. That’s no problem in Rust.

Mutable variables need a mutable closure! The state of your closure is part of the closure. If you mutate a variable in a closure then the closure itself must be made mutable.

These closures increment a counter when executed.

Generating closures dynamically is straightforward once you get over the nuances in the different traits. The make-adder functions take in an addend and generate a closure that takes in a second number and sums the enclosed value with the passed value.

The Fn, FnMut, and FnOnce traits

The move keyword tells Rust that the following block or closure takes ownership of any variables it references. It’s necessary above because we’re returning a closure that references left which would normally be dropped when the function ends. When we move it into the closure, we can return the closure without issue.

The compose function takes two functions and returns a closure that runs both and pipes the output of one into the other.

Each input closure takes one argument of the generic type T and returns a value also of type T. The first of the two closures is the plus_two closure from above. The second closure, times_two, multiplies its input by two.

The generated closure, double_plus_two, composes the original two into one.

This section shows how you can treat any function as a first-class citizen in Rust.

Storing closures in a struct

Storing functions can be a little trickier due to the different Fn* traits and the dyn [trait] behavior.

This code creates a class or struct that you instantiate with a closure. You can then call .run() from the resulting instance to execute the stored closure.

Remember we can’t use impl [trait] outside of a function’s parameters or return value, so to store a closure we need to store it as a dyn [trait]. Also remember that dyn [trait] is unsized and Rust doesn’t like that. We can Box it to move passed Rust’s complaints (see: Day 14 : What’s a box?).

Rust’s closures are not as terrifying as some people make them out to be. You will eventually get to some gotchas and hairy parts, but we’ll tackle those when we deal with async. First though, we’ve put off lifetimes for long enough. We’ll get deeper into Rust’s borrow checker tomorrow before moving on to Arrays, iterators, async, and more.