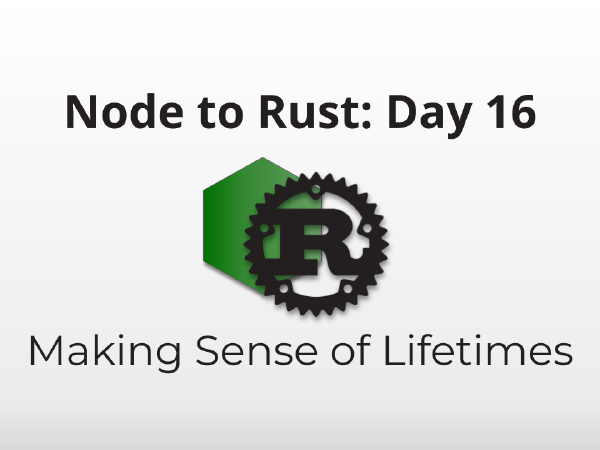 Lifetimes are Rust’s way of avoiding dangling references, pointers to memory that has been deallocated. To a user, this might look like a failed operation or a crashed program. To a malicious actor, it’s an opening. Accessing the memory behind a dangling reference produces undefined behavior. That is another way of saying it produces behavior that is open for others to define.

Bugs like dangling references account for the vast majority of major software vulnerabilities. An analysis from the Chromium team showed that 70% of high severity issues were due to memory safety bugs. If this sort of thing interests you, the phrase you need to search for is “use after free” or UAF vulnerabilities. This is a good introduction to how they’re exploited in browsers. It’s fascinating.

This might sound a little nutty if you’ve never used a language like C where you manage your own memory. Languages like JavaScript and Java manage memory for you and use garbage collectors to avoid dangling references. Garbage collectors track every time you take a reference to data. They keep that memory allocated as long as the reference count is greater than zero.

Garbage collection was a revolutionary invention 63 years ago. But it comes with a cost. In extreme cases, garbage collection can freeze your application for full seconds. Garbage-minded applications rarely see that high of an impact, but the GC always looms in the background. Like a vampire.

There are dozens, if not hundreds, of excellent articles written about Rust lifetimes. This post will address some of the confusion that arises once you’re in the weeds. The additional reading in this section should be considered a prerequisite.

You will frequently come across posts, questions, and answers where the phrase “lifetime annotations” is shortened to “lifetimes” which only adds confusion.

Every time you read a sentence like “you must specify a lifetime” or “give the reference a lifetime,” it’s referring to a lifetime annotation. You can’t give a value a new lifetime.

Every reference has a lifetime, even if you don’t see annotations. Just because you’re not writing annotations on your references doesn’t mean you’re avoiding them.

is equivalent to this function:

This is Rust trying to be helpful. It handles the lifetime annotations for simple cases. The problem is: if Rust handles the trivial cases, the first ones you have to deal with are — by definition — non-trivial. It can feel daunting. Don’t stress about it. You’ve got this. The best way to go forward is to go backward. Write out by hand what Rust was doing for you. It’ll give you a feel for what is expected.

'static is described in great detail in every corner of Rust’s community. The time spent explaining 'static makes it seem more complex than it is. I’ll try to be as succinct as possible.

&'static means this reference is valid for the rest of the program. The data it’s pointing to will not move nor change. It will always be available. This is why string literals are &'static. The data is baked into the program and will never be dropped.

Note: &'static says nothing about the lifetime of the variable holding the reference, however. The program below exemplifies this behavior.

The get_memory_location() function returns the pointer and length of a literal string, a &'static str, that it immediately drops. The get_str_at_location() function takes a pointer plus a length and attempts to read that memory location back as a &str. This works just fine, though we’re using dangerous functions and have to mark them as such with the unsafe keyword.

Uncomment the final line in main() to see why they are unsafe.

On the other hand, adding 'static as a bound is like telling Rust “I want a type that could last forever, if I needed it to.” It’s not telling Rust you only want data that does live forever.

The code below illustrates how a type like String in the second block can satisfy a 'static constraint for the static_bound() function yet not retain the same properties as the &'static references in the first block.

The project day-16-static-bounds in the code repository further illustrates the differences between &'static and T: 'static.

While the two usages are related, the spirit behind each is different.

Because I was curious: Rust’s standard library has 48 instances of &'static (minus &'static str) and 112 instances of 'static as a constraint.

This post went through five iterations before ending with this version. One of the biggest source of headaches with generic types, lifetimes, and references is how you use them with popular third party libraries and async code. We haven’t yet hit those topics yet. We’ll circle back around to common errors and issues when we move into more complex code.

We’re also moving quickly into the final leg of this series. We have a few more foundational posts, then the last week will address how to perform common JavaScript tasks in Rust. Tasks like spinning up a web server, reading/writing files, and parsing/serializing JSON.

If you come across other posts or articles that help clarify any of the topics we’re going through, please send them over so I can add them to the Additional Reading sections.