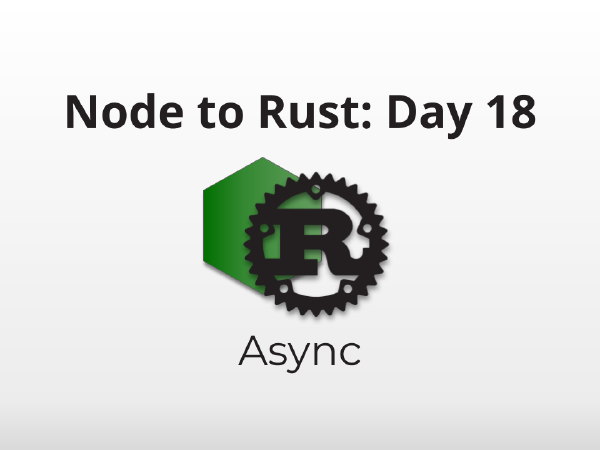 Rust’s async story has its good parts and bad parts. Futures (Rust’s promises) are a core part of Rust. Actually being able to use them is not. That’s weird, let’s break it down.

Rust’s standard library defines what an asynchronous task needs to look like with the Future trait. But implementing Future isn’t enough to be “async” on its own. You need something that will manage them. You need a futures bucket that checks which futures are done and notifies what’s waiting on them. You need an executor and a reactor, kind of like node.js’s event loop. You don’t get that with Rust. The Rust team left it to the community to decide how best to flesh out the async ecosystem. It may seem nuts, but did you know there was a time where JavaScript didn’t have promises? JavaScript had this problem in reverse. It had the executor and reactor but no way to represent a task. The community had to define what a Promise was. We were left polyfilling them until they landed in ES6.

In Rust, you have to polyfill async. Maybe it’ll exist in Rust core someday, but that’s not relevant. The important part is figuring out which polyfills exist now and how to get started ASAP.

There are more, but this is already enough. Every library has their audience and there’s little point debating which one is “best.” What’s important right now is which will be the easiest to deal with. That’s Tokio. There are libraries that depend on Tokio’s behavior which means you can’t (easily) use them without also using Tokio’s executor. It’s a bit of a hostage situation. Tokio’s not bad though. It has documentation, loads of community contributions, and there’s a lot of code to learn from. It’s just a weird situation to be in when you’re used to async JavaScript and node.js.

Did you know that there used to be many other server-side JavaScript implementations before node.js? Some of them were even single-threaded and required you to deal with blocking logic by forking. Tokio is kind of like node.js. It’s an async implementation with a core set of async methods you can rely on. Smol is kind of like deno. It’s newer, has an answer for interoperability, but promises to be faster and better.

Add Tokio as a dependency in your Cargo.toml with the full feature flag.

Feature flags expose conditional compilation to users of a library. All tags are arbitrary, “full” doesn’t mean anything special. In some libraries feature flags are used to turn on or off platform-specific code. In others like Tokio, it’s used to conditionally require what amounts to sub-crates. Tokio used to be split up into many small modules. Community feedback changed that course and now we use feature flags.

When you get more comfortable, you can read up on the feature flags and trim it down to what you need.

You must starting an executor before running your futures. Tokio gives you a handy macro that sets everything up behind the scenes. You add it to main() and voila, you get a fully async Rust.

Unlike JavaScript, the await syntax must be appended to an actual future. It isn’t prepended nor can it be used on arbitrary values. It looks like this.

Also unlike JavaScript, your futures don’t run until you await them.

Uncommenting the line above produces

Asynchronous behavior and closures are part of every developer’s toolbox. You will inevitable get to a point where you try to return a closure that’s also async and you run into this error:

Async closures are unstable but the helper text advises you to use async blocks. Async blocks?

That’s right, any old block of code in Rust can be async all on its own. They implement Future and can be returned from functions just like any other value:

You can get all the parts of an async closure you need by making a closure that returns an async block!

Using threads and futures combined with traits will rapidly get you into a situation where you start seeing Rust complain about Send and Sync, frequently combined with the error future cannot be sent between threads safely.

The code below won’t compile. It demonstrates a scenario that produces the error.

Send and Sync are core to how Rust can promise “fearless concurrency”. They are automatic traits. That is, Rust automatically adds Send or Sync to a type if all of its constituent types are also Send or Sync. These traits indicate whether a type can be sent safely across threads or safely accessed by multiple threads. Without these constructs, you could fall into situations where separate threads clobber each other’s data or any number of other problems stemming from multi-threaded programming.

Lucky for you though, many Rust types are already Sync and Send. You just need to know how to get rid of the error. It’s as simple as adding + Send, + Sync, or + Sync + Send to your trait:

But now we’re presented with another error…

We went over 'static in Day 16: Lifetimes, references, and 'static which is perfect. We now know that we shouldn’t fear it. Rust knows that it doesn’t know when our async code will run. It’s telling us that our type (parameter type `T`) may not live long enough. That wording is important. We just need to let Rust know that the type can last forever. Using 'static here is not saying that it will last forever.

There’s a lot more to Send & Sync but we’ll deal with that another time.

Async Rust is beautiful. There’s enough to write a whole twenty-four posts on it alone. Rust’s memory guarantees mean you can write multi-threaded, asynchronous code and be confident it won’t explode in your face. This is where you start to turn up the heat and leave JavaScript behind. Yes, you can use threads in node.js and there are web workers but it’s a weird middle ground. It’s a compromise. With Rust, we don’t have to compromise.

How are you handling the transition to Rust? It’s not easy but it’s doable. If you have questions, you can reach me personally on twitter at @jsoverson, the Candle team at @candle_corp, or join our Discord channel.