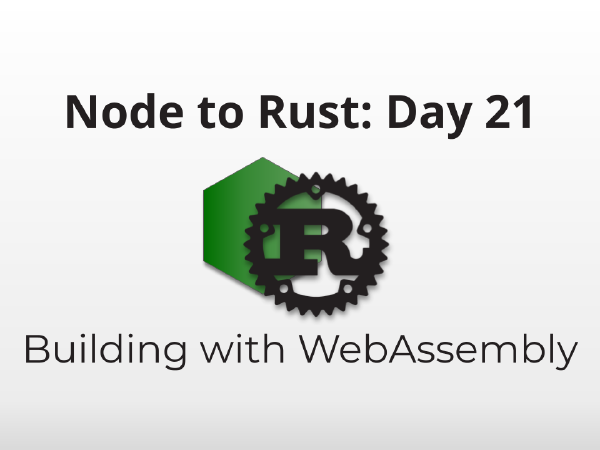 WebAssembly is the most exciting technology I’ve come across since, well, node.js. Server-side JavaScript had been around for ages, but node.js made it attractive. It was a real development platform, not just a scripting host. A lot of people – myself included – thought JavaScript could be the universal compilation target. Write once, run anywhere. But for real, this time. We even had terms like “Univeral JavaScript” and “Isomorphic JavaScript.” We had UMD, the universal module definition to share modules across any platform.

We got close, but we didn’t get all the way. Part of the problem is that a lot of important applications depend on serious CPU work. JavaScript just isn’t cut out for that no matter how hard we try. We can’t always rely on extending the web platform for every use case.

WebAssembly was built for the web but has since gained traction as a universal bytecode format to run code everywhere from the cloud to the blockchain to the internet of things. WebAssembly offers no standard library and can only compute. WebAssembly modules can’t even access the filesystem on their own. Many see these as shortcomings, but more are starting to consider them features. Since you have to compile foreign standard libraries in your WebAssembly modules, it means every module reliably runs on its own. They’re like docker containers for code. Add WASI, the WebAssembly System Interface and the you get granular permissions for expanded capabilities like filesystem or network access.

Oh yeah, you can use WebAssembly in web browsers. That’s cool, too.

This project builds off the previous two days. It’s not critical that you have the foundation to make use of the code here, but it helps.

Compiling down into WebAssembly is easy. What’s hard is making it do anything useful. WebAssembly can still only talk in numbers (mostly). You can only pass numbers into WebAssembly and WebAssembly can only return numbers. That makes WebAssembly sound like its only good at math, but you could say the same thing about computers. We’re skilled at making automatic math machines (a.k.a. “computers”) good at everything.

WebAssembly will eventually get to a point where it’s easier to pass arbitrary data types. Until we get those standards, we have to define our own.

The waPC project, or WebAssembly Procedure Calls, defines a protocol for communicating in and out of WebAssembly. It’s like a plugin framework with WebAssembly as the plugin format. In waPC terms, the implementer is a “host” and a WebAssembly module is a “guest.”

We’ve written three guides on how to get started on waPC. The second helps you build WebAssembly modules in Rust and the third shows you how to run them in node.js.

This guide will go through how to make a waPC host in Rust to run the same modules.

We’ve pre-built a test module as part of this series’ code repository. It has one exposed operation, hello that takes a string and returns a string.

We started off building our project with tests in my_lib. Our one test runs a stub function Module::from_file. Now we need to finish things up.

You can perform basic reads with std::fs::read and std::fs::read_to_string. Since we’re loading binary data we’ll need to use fs::read to get a list of bytes, a Vec<u8>.

Now that we have bytes, what are we going to do with them? It makes sense that our Module might have a constructor function, a new(), that takes bytes. Let’s finish this function up like so:

But now we have a problem. It’s the same type of problem we had in Day 14: Managing Errors. I know that new() will need to return a Result because loading any old list of bytes as WebAssembly may fail a thousand ways. None of those ways will be an io::Error like the one from_file returns. We need a general error that can capture multiple kinds.

Time for a custom error.

Make a new file named error.rs and start our Error enum. We only know that we’ll need an error to manage a load failure but that’s a fine start.

Rather than wrap the io::Error and be done, we added a custom message and multiple arguments so we can customize the error message.

To use our Error, first declare the error module in lib.rs and import our Error with:

Now we can change the Result type to return our error and use .map_err() on the read() call to map the io::Error to our Error:

.map_err() is a common way of converting error types, especially when combined with the question mark (?) operator. We didn’t add an implementation of From<io::Error> because we wanted to have more control over our error message. We have to manually map it ourselves before using ?.

Using the wapc and wasmtime-provider crates

Add wapc and wasmtime-provider to your Cargo.toml.

Before we make a WapcHost, we need to initialize the engine.

The second parameter is our WASI configuration, which we’re omitting for now.

The WapcHost constructor takes two parameters. One is a Boxed engine. The second is the function that runs when a WebAssembly guest calls back into our host. We don’t have any interesting implementations for host calls yet, so we’re just going to log it and return an error for now.

The constructor returns a Result with a new error so we need to add another error kind to our Error enum.

We also need to store the host as part of our Module so we can run it later.

We now have a from_file that reads a file and instantiates a new Module. If we run cargo test, it should pass.

Now we need to actually run our wasm!

Calling an operation in WebAssembly

Transferring data in and out of WebAssembly means serializing and deserializing. While waPC does not require any particular serialization format, it’s default code generators use MessagePack. That’s what we’re going to use too but you’re free to change it up later.

Add rmp-serde to a new dev-dependencies section in our Cargo.toml so we can use it in our tests.

Like before, we’re going to write a test before our implementation. Our test module contains one exposed operation named hello that returns a string like "Hello, World." when passed a name like "World".

The test will run that operation and assert the output is what we expect.

Line-by-line, the test above:

When you run the test it won’t get passed compilation. We don’t have a .run() method and we need to implement it first.

Our .run() function needs to use the WapcHost we created to call into WebAssembly and return the result.

You call a guest function from a WapcHost by using the .call() function with the operation (function) name and the payload as parameters.

If we run our tests again, we’ll see our new test passes too!

Now that our library loads and runs WebAssembly, we need to expose that with our command line utility.

We have two new arguments that need a place in our CliOptions, the operation name and the data to pass.

We started by putting everything into our main() function but that leaves us little room to manage errors nicely. If we bail from main() we get a pretty ugly error message and it looks unprofessional.

The setup below extracts business logic to a run() function that produces a Result that we can test in main(). If we get an error, we print it and then exit the process with a non-zero error code to represent failure.

Notice how we’re also using anyhow here. If you remember from Day 14: Managing Errors, anyhow is a great crate for when you are the end user. It generalizes over most errors and gives you the ability to get things done faster.

Along with anyhow, we’ll also need to add rmp-serde to our production dependencies because we’ll be serializing our argument data before sending it to WebAssembly.

Our .run() looks very similar to our test, except the data comes from our CliOptions vs hard coded strings.

Now we can use our CLI utility to run our test wasm itself!

This is a great start to a flexible WebAssembly platform! Congrats! Unfortunately it’s limited to only passing and returning strings for now.

We can do much better…

This post was a big one, I hope you were able to follow along! Developers are using WebAssembly in many different ways. waPC is only one of them. Wasm-bindgen is also popular and more tailored to browser usage of WebAssembly. No matter what route you take, you’ll inevitably need to forge your own path through hazardous terrain. WebAssembly is very capable, but it hasn’t hit mainstream development yet. As such, best practices are hard to come by.

Next up we’ll make our CLI more flexible by allowing it to take and receive arbitrary JSON so you can run any sort of (waPC-compliant) WASM module.

If you have questions or comments, you can reach me personally on twitter at @jsoverson, the Candle team at @candle_corp, or join our Discord channel.