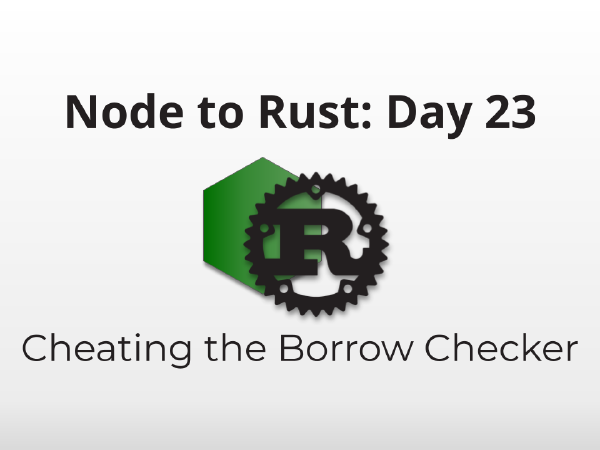 Over the last twenty-two days you’ve gotten comfortable with the basics of Rust. You know that Rust values can only have one owner, you kind of get lifetimes, and you’ve come to terms with mutability. It’s all a bit strange but you accept it. People are making big things with Rust and you trust the momentum. You’re ready.

Then you start a project. It goes well at first. You get into a groove and then – all of a sudden – you’re stopped dead in your tracks. You can’t figure out how to satisfy Rust. You’ve already bent over backwards. You’re drowning in references and lifetime annotations. Rust is yelling about Sync, Send, lifetimes, moved values, what have you. You just want more than one owner or multiple mutable borrows. You’re about to give up.

That’s where Rc, Arc, Mutex, and RwLock come in.

Yeah, it’s not “cheating the borrow checker,” but it feels like it.

I don’t know about you, but my journey through Rust was an emotional tug-of-war. The heavy focus on Rust’s lifetimes and borrow checker made it seem like I was wrong when I ran up against it. I felt like I was trying to cheat and kept getting caught. I would refactor and refactor but always end up in the same place.

Turns out I was wrong, but not in the way I thought. My interpretation of Rust docs and articles gave me tunnel vision. I had myself convinced that reference counting was bad so I never looked for it. When I saw it, I assumed it was in a negative context and I skimmed passed. This was only reinforced by seeing recurring references to how you should avoid things like Rc<RefCell>. I lost a lot of time. I hope you don’t.

Consider a situation where you have an value that multiple other structs need to point to. Maybe you’re building a game about space pirates that have high-tech treasure maps that always point to a treasure’s actual location. Our maps will need a reference to the Treasure at all times. Creating these objects might look like this.

Our Treasure struct is straightforward:

But our TreasureMap struct holds a reference and Rust starts yelling about lifetime parameters. A budding Rust developer might accept what they’re told to get things compiling. After all: if it compiles, it works. Right?

It works! Our code grew a bit and for questionable value, but it works.

If you keep going, you’re rewarded with more pain and no perceivable gain.

Remember how Box essentially gives you an owned reference (see: Day 14 : What’s a box?)? Rc is like a shared Box. You can .clone() them all day long with every version pointing to the same underlying value. Rust’s borrow checker cleans up the memory when the last reference’s lifetime ends. It’s like a mini garbage collector.

You use Rc just as you would Box, e.g.

Rc does not work across threads. That is, Rc is !Send (See: Day 18: Send + Sync). If we try to run code that sends a TreasureMap to another thread, Rust will yell at us.

Arc is the Send version of Rc. It stands for “Atomically Reference Counted” and all you need to know is that it handles what Rc can’t, with slightly greater overhead.

When Rust documentation refers to “additional overhead” for a feature you need, just take it. You come from JavaScript, don’t fret about “overhead.”

Arc is a drop-in replacement for Rc in read-only situations. If you need to alter the held value, that’s a different story. Mutating values across threads requires a lock. Attempting to mutate an Arc will give you errors like:

If Arc is the answer to you needing Send. Mutex and RwLock are your answers to needing Sync.

Mutex (Mutual Exclusion) provides a lock on an object that guarantees only one access to read or write at a time. RwLock allows for many reads but at most one write at a time. Mutexes are cheaper than RwLocks, but are more restrictive.

With an Arc<Mutex> or Arc<RwLock>, you can mutate data safely across threads. Before we start going into Mutex and RwLock usage, it’s worth talking about parking_lot.

The parking_lot crate offers several replacements for Rust’s own sync types. It promises faster performance and smaller size but the most important feature in my opinion is they doesn’t require managing a Result. Rust’s Mutex and RwLock return a Result which is unwelcome noise if we can avoid it.

When you lock a Mutex or RwLock you take ownership of a guard value. You treat the guard like your inner type, and when you drop the guard you drop the lock. You can drop a guard explictly via drop(guard) or let it drop naturally when it goes out of scope. When dealing with locks you should get into the practice of dropping them ASAP, lest you run into a deadlock situation where two threads hold locks the other is waiting on.

Rust’s blocks make it easy to limit a guard’s scope and have them drop automatically when you are done with them. The code sample below uses a block to scope the guard from treasure.write() so that it automatically drops at the end of the block (line 8)

Async Rust and futures add another wrench into the lock and guard problem. It’s easy to write code that holds a guard across an async boundary, e.g.

The best solution is to not do this. Drop your lock before you await. If you can’t avoid this situation, tokio does have its own sync types. Use them as a last resort. It’s not about performance (though there is that “overhead” again), it’s a matter of adding complexity and cycles for a situation you can (or should) get out of.

RwLock and Mutex (along with types like RefCell) give you the flexibility to mutate inner fields of a immutable struct safely, even across threads. Arc and Rc were major keys to me understanding how to use real Rust. I overused each of these types when I started using them. I don’t regret it one bit. If you take away only one thing from this series, let it be that you need to do what works for you. If you keep trying you can always improve, but you won’t get anywhere if you’re so frustrated you give up.

We only have one more day left in this series and I hope you found something valuable here. Come join us on our Discord channel to ask questions and share with others. If you have questions or comments, you can reach me personally on twitter at @jsoverson, the Candle team at @candle_corp.