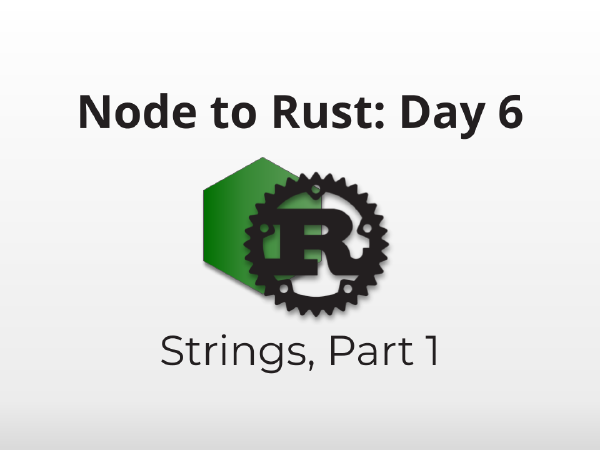 The first hurdle with Rust and strings comes from misaligned expectations. A string literal ("Hi!") isn’t an instance of a String in Rust. You don’t need to fully understand the code below yet, just know that it outputs the types of the values sent to print_type_of.

JavaScript hand waves away the difference between string primitives and String instances. It automatically does what you want, when you want it, without incurring the overhead of creating an Object for every string. When you call a method on a primitive string, JavaScript interpreters magically translate it to a method on the String prototype.

Rust has similar magic, it just doesn’t always do it for you.

There is a lot written about Strings. Don’t miss the official docs and other great posts out there.

Rust strings in a nutshell

String literals are borrowed string slices. That is to say: they are pointers to a substring in other string data. The Rust compiler puts all of our literal strings in a bucket somewhere and replaces the values with pointers. This lets Rust optimize away duplicate strings and is why you have a pointer to a string slice, vs a pointer to a single String.

You can verify the optimizations are real, if you don’t believe me. Copy-paste the print line below a gazillion times (or less) and see that it only has a minor impact on the executable size.

You can also run the (not-rust-specific) strings command to output all the string data in a binary.

If you run that command on the 200-unique-prints binary in the node-to-rust repo, you’ll get much more output.

Strings are the strings that you know and love. You can change them, cut them up, shrink them, expand them, all sorts of great stuff. All that brings along additional cost though. Maybe you don’t care, maybe you do. It’s in your hands now.

How do you make a &str a String?

For what its worth, this method calls the code below under the hood.

self is Rust’s this.

This is why we had to go over ownership before we got into strings. String literals start off borrowed. If you need an owned String, you have to convert it (copy it, essentially).

You’re telling me I need to write .to_owned() everywhere?

Yes. And no. Sort of. For now, accept “yes” until we get into Traits and generics.

All these options also turn a &str into a String. If this is your first foray into Rust from node.js, don’t worry about this section. This is for developers who have read all the other opinions out there and are wondering why other methods aren’t the “one true way.”

A Rust trait is sharable behavior. We haven’t gotten to them yet, but think of a trait like a mixin if you’ve ever used the mixin pattern in JavaScript.

something.to_string() converts something into a string. It’s commonly implemeted as part of the Display trait. You’ll see a lot of posts that recommend .to_string() and a lot that don’t.

The nuances in the recommendation stem from how much you want the compiler to help you. As your applications grow — especially when you start to deal with generics — you’ll inevitably refactor some types into other types. A value that was initially a &str might end up being refactored into something else. If the new value still implements Display, then it has a .to_string() method. The compiler won’t complain.t

In contrast, .to_owned() turns something borrowed into something owned, often by cloning. Turning a borrowed not-string into an owned not-string gives the compiler the context necessary to raise an error. If you’re OK with the difference, it’s easy to change a .to_owned() into a .to_string(). If you weren’t expecting it, then you highlighted an issue before it became a problem.

Clippy has a lint that will alert you if you use .to_string() on a &str: clippy::str_to_string

something.into() will (attempt) to turn something into a destination type by calling [dest_type]::from(), e.g. String::from(something). If the destination type is a String and your something is a &str then you’ll get the behavior you’re looking for. The concerns are similar to those above. Are you really trying to turn something into something else, or are you trying to turn a &str into a String? If it’s the former, then .into() works fine, if it’s the latter then there are better ways to do it.

String::from(something) is more specific than .into(). You are explicitly stating your destination type, but it has the same issues as .to_string(). All it expresses is that you want a string but you don’t care from where.

format!() is for formatting. This is the only one you should definitely not use for simply creating a String.

Clippy also has a lint for this one: clippy::useless_format

The path to this “one, true answer” is mapped out here. At the end of the road, everything points to .to_owned().

Turning &str into String is the first half of the string issue. The second is which to use in function arguments when you want to create an easy-to-use API that takes either string literals (&str) or String instances.