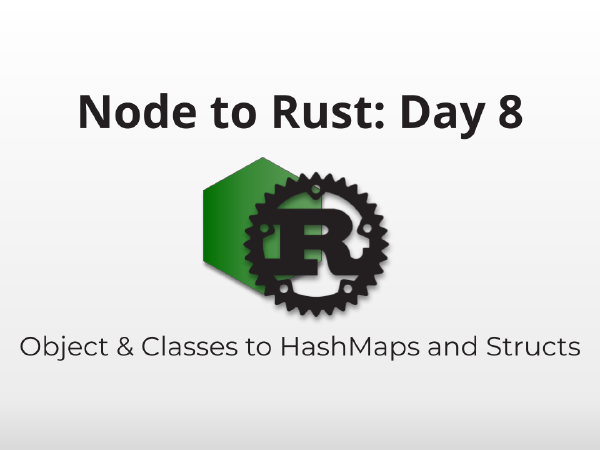 Node to Rust, Day 8: From objects and classes to HashMaps and structs

Yesterday we went over some basic differences between JavaScript and Rust and finished with Vectors, the Rust counterpart to JavaScript’s arrays. Arrays are a core structure in JavaScript but pale in comparison to the almighty Object. The JavaScript Object is a beast. It takes a hundred concepts and wraps them into one. It could be a map, a dictionary, a tree, a base class, an instance, a bucket for utility functions, and even a serialization format. The next couple sections will unpack the typical use cases of the JavaScript Object and translate them to Rust.

As we move forward, this guide will start to use more TypeScript than JavaScript. You’ll need to have ts-node installed (npm install -g ts-node) to run the examples. If you want a TypeScript playground, check out my boilerplate project at jsoverson/typescript-boilerplate.

Before ECMAScript 6, JavaScript didn’t even have Map. It was Objects all the way down. That led a whole generation down the path of treating Objects as Maps and persists today. That’s not necessarily a bad thing, but the theme of this guide is: you don’t get to magic away the details anymore.

First we need to clarify the difference between a JavaScript Map and an Object.

A JavaScript Map is essentially a key/value store. You store a value under a key (be it a string or anything at all) and retrieve that value with the same key.

A JavaScript object is a data structure that has properties (a.k.a. keys) which hold values. You set values via a property (a.k.a key) and retrieve values the same way. While not a term used in JavaScript, an object is a “dictionary.” Dictionaries are described as:

A dictionary is also called a hash, a map, a hashmap in different programming languages (and an Object in JavaScript). They’re all the same thing: a key-value store.

I’m glad I could clear things up for you. I’m kidding, but it’s to prove a point so bear with me. In JavaScript, the reason to choose a certain type isn’t always clear. You can use Map and Object interchangeably for many purposes. It’s not like that in Rust. We need to separate our use cases before moving on. In short:

When you want a keyed collection of values that all have the same type, you want a Map type.

When you want an object that has a known set of properties, you want a more structured data type.

A “Map” is a concept and languages usually have many implementations. We’ll talk about the HashMap type below. The structured data use case usually falls under the category of a language feature. In Rust’s case it’s called a struct.

From Map to HashMap

To store arbitrary values by key, we’re going to want a HashMap. While there are alternatives, don’t worry about them yet.

This is how you’d create a Map in TypeScript. JavaScript would be identical minus the <string, string>.

In Rust, you would write:

This looks nearly identical but I’d be dishonest if I moved on quickly. When you run the Rust code, the output is:

Which is kind of what we wanted.

Some(), None, and Option

Take a look at that Some() craziness. What in the world was that about? Some is a variant of the Option enum. Options are another way of representing nothing like we talked in Day 7: Language Part 1: Syntax & Differences.

An enum (short for enumeration) is a bound list of possible values, or variants. JavaScript doesn’t have them, but TypeScript does. Rust enums are cooler, though.

We’ll get to enums in time, but think of Option as a value that can hold either something or nothing. If we pass a key that doesn’t exist in our map, get() needs to return nothing but we don’t have undefined in Rust. We could return the unit type (()) but we can’t write a function that returns string | undefined like we could in TypeScript. Instead, Rust has enums. That’s where Option comes in. The Option enum has two variants, it’s either Some() or None.

You can test an Option with .is_some(), or .is_none(). You can “unwrap” it with .unwrap() which will panic if it’s None. You can unwrap it safely with .unwrap_or(default_value). See the Rust docs on Option for more.

We can rewrite the above to clean up the output.

We know that our map contains values for the keys we specify, so we could have used .unwrap() without worrying. If we did however, we wouldn’t be able to use it for the example below. Such is the life of example code.

These types of errors can be very confusing. The helper text says rust expected a &str but found a str and then proceeds to note that it actually expected a &&str yet found &'static str. I already told you that string literals are the type &str, not str and never mentioned anything about 'static. What gives?

Let’s break it down.

So what’s that helper text talking about then? I don’t know. It looks wrong. I hadn’t thought about it much until you asked. You ask great questions.

From objects and classes to structs

Rust’s structs are as ubiquitous as JavaScript’s objects. They are a cross between plain old objects, TypeScript interfaces, and JavaScript classes. While you frequently use a Rust struct with methods (e.g. some_object.to_string()) which make them feel like normal class instances, it’s more helpful to think of structs as pure data to start. Behavior comes later.

…would be written as a struct in Rust like this.

Instantiating is similar, too:

But you probably wouldn’t write an interface for this in TypeScript. You’d write a class so it can be instantiated with defaults and have methods, right? Something like:

To do this in Rust, you’d add an implementation to your struct.

To add behavior we add an impl.

This adds a public function called new() that you can execute to get a new TrafficLight. Self refers to TrafficLight here and you could replace one with the other with no change in behavior. There’s nothing special about new or how you call it. It’s not a keyword like in JavaScript. It’s convention. Call it via TrafficLight::new(), e.g.

This works but we can’t really verify it. You could try printing it but — spoiler alert: it won’t compile. You can’t even use the debug syntax I mentioned in an earlier post.

Traits are like mixins in JavaScript. They are another way of attaching behavior to data. Traits are a big topic that deserve a whole section, but we can add some simple ones today.

This implements a trait (Display found at std::fmt::Display) for our TrafficLight. Now we can print our traffic light via println!()!

Traits can also have default, derivable implementations. This allows you to generalize behavior and reduce boilerplate. If all the fields in your struct implement the Debug trait, you can derive it with a single line (#[derive(Debug)]) and gain debug output for free.

When you run it, you’ll see both our display line and the debug line printed to STDOUT.

HashMaps are the key to storing and accessing data with a key/value relationship. We’ll touch on them more in an upcoming section on Arrays and Iterators. Keep reading the documentation and don’t forget to post comments on our Discord channel.

Structs are how you bring some of the class behavior to Rust. Simple usage of JavaScript and TypeScript classes is easily portable. Tightly coupled relationships and object-oriented patterns aren’t. It’ll take some time to get used to traits but the benefits of how you structure your code and logic will transfer back to JavaScript.

Traits are powerful and are what give structs their life. The separation of data and behavior is important and takes some practice getting used to it. We’ll go over adding methods and more to our structs tomorrow.